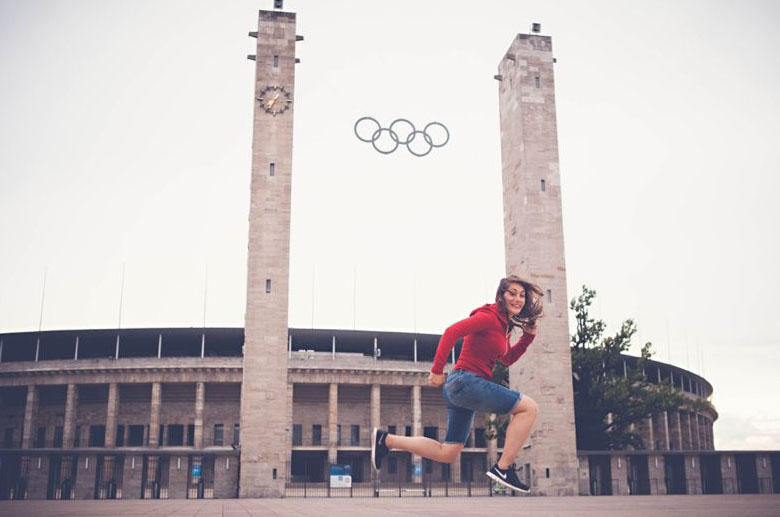 It’s a fact: I love sports and working out. Everybody knows this. There is something about breaking a sweat and pushing myself to the limit that I  can’t get enough of.And what I really really can’t get enough of are the summer Olympics. I can think back to so may times when during the olympic games I have been motivated to eat healthier, set more ambitious goals, and get much more out of my workout. During my third day in Berlin, and having checked most of the items on my Berlin bucket list, I found out by chance that I was a quick train ride away from the Olympic stadium! How did I not know this?!

The history of it is beautiful too. The 1936 summer Olympics were held in this stadium, and were actually inaugurated by the head-of-state, a man by the name of Adolf Hitler. At the time of the games Hitler was really excited about the world being able to witness the height of arian supremacy.

The 2006 World Cup final was also held at the Olympiastadion. As you may remember, that was also the game where soccer legend Zinedine Zidane played his very last game, and tainted his reputation by giving the infamous head-butt to Italian player Marco Materazzi. Again, making sports history… even if it wasn’t for the most noble reasons.

But of course, the biggest thing about visiting the Olympiastadion is the wide array of feelings you get while walking around knowing everything that has happened within it’s walls, on it’s grass, and under it’s sky. And maybe even more so if you stop to think about everything that is to come.

i am an international portrait and wedding photographer based out of bilbao, spain. i love spending time finding new coffee spots and traveling as much as i possibly can. i am addicted to chocolate, chick flicks, and hitting the gym daily. when i am not doing any of the above i am likely to be found playing my acoustic guitar in some random corner of the house, dropping lyrics like a bad habit. That's all you need to know for now... keep reading and learn more! ;) View all posts by adina noel